“If the Good People Can Win…”

Election night, November 8, 1960. It’s late and I’m in the living room with my father, glued to the television as the returns come in – Kennedy vs. Nixon, in the closest presidential race in decades. In 6th grade, I had begun to take interest in larger social and political issues. This didn’t come in a vacuum. Every morning Dad read the paper and every night he watched Walter Cronkite deliver the news.

My father had been one of ten thousand Vermonters who came out on the spur of the moment to greet JFK when he landed for a brief stop at Burlington Airport the day before the election. In the surging crowd, Dad was lucky to get close up. Being tall, he reached across the tops of others’ heads to shake the candidate’s hand. Dad’s glove slipped off. Kennedy smiled right at him as he handed it back. Dad was thrilled, and so were we hearing this story.

Now the TV buzzes with excitement and we buzz too, tired but too excited to turn it off. A little after midnight, Nixon comes on the screen to say if the trends continue, it appears Kennedy will be the next president. The next day Nixon concedes. We are happy, and I am a believer that this is democracy, that voting is important, and that this is how we change the world. If the good guys can win, everything will be all right.

But the world was not all right. At age 12, I was not only becoming aware of social issues beyond my white middle class life, but I was beginning to feel them. In my diary, I wrote that juvenile delinquency was “awful” and “icky.” Tracking down into those young feelings as I write today, I find underneath the revulsion and pity lies fear. Fear I didn’t want to feel. Fear that the grownups really don’t have everything in control. They don’t have the answers. And if they don’t, who does? Fear. Kids – and grownups – can be mean and violent for no apparent reason. The world is not safe. Sadness. Grief that people can turn so thoroughly away from love and kindness and belonging. The things that make me feel safe. And there is no way to fix it, make it all better. As an adult now in this moment, I sit weeping for that little girl. I wish I could hold her and say, “Oh, baby, yes, this world really is a heartbreaking place.” As a young girl, I could only push that pain away. “I feel sorry for them.” It’s them. It’s them. Not me. Not my life.

So it’s 2020 now. Sixty years have passed. The world was not all right back then and it’s not all right now. Today is the day of another close election — one that feels monumental in its consequences. It’s been 3 years since the last post on this blog — right after the Charlottesville rally and protests that brought white supremacy smack into the into the public eye with vivid force. Since then, so much more has happened and continues to happen. We are in a world unimaginable to that little girl back in 1960. Almost unimaginable to the person I am today. We are living in shock — from a global pandemic that has affected every aspect of our lives and a response to it that threatens not only our health but the social fabric of our communities and country. Our emotions are played upon daily — hope and fear, lies and truth — making it hard to separate out what matters and what doesn’t. Polls offer us hopeful possibilities. Past experience tells us they may mean nothing.

We have seen the power of lies told over and over, loudly and with force, and the insidiousness of misinformation spread more subtly through social media. The meta-campaign at this moment is not Trump vs. Biden, Republicans vs. Democrats, but the campaign to sow doubt about the election process itself — will everyone’s vote be counted? Can we trust the results?

I’ve recently been reading My Grandmother’s Hands by Resmaa Menakem, about personal and collective trauma and how it lives in our bodies and is passed down through generations. Practicing one of his contemplations, I realized that the 2016 election had an impact on me I hadn’t recognized before. For the first time it looked like we would have, really could have, a woman President of the United States. A smart, experienced, uniquely qualified woman. For the young girl who still lives in me and the grown woman I have become, that was a special dream come true. Three

million more people voted for Hillary Clinton than voted for Donald Trump. Three million! But we know what happened. Heartbreaking. Now dare I hope for a woman vice president — a smart, experienced, uniquely qualified woman? Yes, I do. And if Kamala Harris does not become vice president, I know that strong, influential women in public office are not going away. And, totally within my power, I can be — am — a strong, influential woman who is not going away.

So many different parts of me are swirling around. Thoughts and emotions. Hope and fear. Bits and pieces of “realities” that arise and fall and arise again. Some headlines from this week:

As a child I couldn’t understand how “kids – and grownups – can be mean and violent for no apparent reason.” Now I know much more about the reasons, the psychological complexities, the social and economic contexts, but there is still a young voice inside, full of outrage, fear and helplessness. It’s crazy-making that the very people who are fomenting this distrust are the same ones who are undermining measures to ensure that people are able to vote. Accuse your opponents of the very thing you are doing. The young part of me wants to scream, “It’s not fair! It’s not fair!” No, it’s not.

I hate feeling helpless. A couple of months ago, after waking up day after day with anxiety about the election, I decided I had to do something, however small it might be. So, I connected with Vote Forward and began writing letters to Democratic-leaning voters in Iowa who had not voted in recent elections. Not telling them who to vote for, but telling them why I always vote and urging them to vote too. It turns out many of my friends and family are doing the same thing — reaching out person to person, making a human connection through writing postcards, letters and phone calls.

Have voter suppression tactics worked? Are people afraid to vote? It seems the opposite, actually. People have been voting and are voting in greater numbers than ever before. Determination. Persistence. Doing whatever it takes. I voted by mail for the first time. Early. Put the ballot in a U.S. mailbox. Verified online that it was received. That was easy compared to standing in line for hours and hours in rain or heat, just to cast my ballot. People are doing that at this very moment. 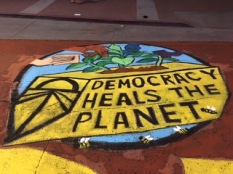 Voting may not change the world in the way I believed as a child, but it really can matter who wins, as we have seen for the last 4 years. Leaders shape what is possible, create a foundation to build on, offer a vision that magnetizes people in one direction or another. What do you care about? What kind of society do you want to cultivate? Here and now. I could say I want a society that values and includes everyone as worthy human beings.

I found out recently that someone I know in my meditation community is a Trump supporter. Wow! It’s so easy to demonize people in the abstract! This person is a devoted practitioner, a generous student of the dharma. Buddhism teaches awareness, compassion and skillful action. How can he believe that what’s happening is okay? How?? I don’t understand what it’s like to be him. He is still the same person he was before I knew this about him. Nothing has changed really, but now there is a label in my mind. How much I attach to that is up to me.

One of my close teachers and mentors said to me just yesterday, “What I’m working on is how to hold both the winners and the losers — whoever they are — in love. Because whatever happens, a lot of people will be feeling pain. Can I feel for the losers and celebrate with the winners?” This reminds me of MLK saying, “Darkness cannot drive out darkness; only light can do that. Hate cannot drive out hate; only love can do that.”

I’m not there yet. A friend of mine declared recently, “Amy Coney Barrett’s faith is not the only kind of faith. I want to reclaim faith for myself.” Yes! In the midst of this roller coaster of intensity, I realize I do have faith. Not in a particular God that’s on my side, or a particular outcome, not that the electoral process will be fair or that justice will be served. I want to reclaim faith as a universal force, an unshakable conviction in the human heart, in Spirit as a resource we all have access to, that we are part of nature and belong to each other. Faith in the basic goodness of ourselves as human beings — beyond the “good” and “bad” winners or losers. I have faith that personal and deep connection with ourselves and each other is the way toward healing what separates us. This faith is active. It has to be renewed over and over. Practiced. Remembered.

As I wrote those letters to people in Iowa, I imagined them reading my handwriting and knowing another person cared enough to write those words, asking them to care enough to vote. What did I say? I told them about sitting up late at night watching election returns with my dad and how that taught me about how democracy works and that voting matters.

Power to the people!

This entry was posted in Uncategorized. Bookmark the permalink.

3 Responses to “If the Good People Can Win…”