How I Didn’t Go to the 1963 March on Washington 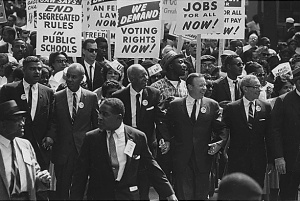 “More than 200,000 Americans, most of them black, but many of them white, demonstrated here today for a full and speedy program of civil rights and equal job opportunities. It was the greatest assembly for a redress of grievances that the capitol has ever seen.”
—Front page story, New York Times, Thursday August 29, 1963

I could have been there. I could have stood in the crowd of thousands facing the Lincoln Memorial on a bright day in August 1963, hearing the unforgettable voice of Reverend Martin Luther King, rising and falling— “I have a dream…..”

Fifty years later, I look back on the moment that opportunity came and went – and the forever mystery of how nonverbal signals and unspoken feelings communicate powerful messages contrary to spoken beliefs. And how, as Ruth Frankenberg says, “The working of memory is complex, political, and idiosyncratic.”

I had just turned 15 in the summer of 1963. Growing up in Vermont with liberal parents, I knew what was going on in the bigger world—the lunch counter sit-ins, the marches and boycotts that were in the news. I had read Black Like Me earlier that spring and written a report for school on the movie of A Raisin in the Sun when I was 13. And I was for civil rights, believed that people should be treated fairly and everyone should have a chance.

About a week before the march, my mother came into the bedroom on the third floor where I had created my own little world, away from the noisy downstairs, my five younger brothers and sisters, the pounding feet. It was late at night. I was sitting on my bed, writing in my journal. Standing in the doorway, half in and half out of the room, Mom told me some friends of hers and Dad’s were going to the March on Washington and asked if I wanted to go with them.

Here’s how I came to remember what happened next:

I took in her words—an invitation to go away—not with the family or to summer camp, but to do something very different, with strangers. What would it be like? My imagination flew into the unknown. A long bus ride—in the dark—to a place where a lot of people would be—more than I could imagine all gathered in one place—because of what they believed in, which I also believed in. (I wonder now, was some part of me aware that a lot of them would be “Negroes”? Did that affect my feelings? In memory, it is more a generalized “unknown.”)

My mother’s question stopped my mind, there in my safe room with my record player and my favorite books. She waited silently for my answer.  Did she think I should go? Why weren’t she and Dad going? Would I be going for them? Should I really want to go? Did I want to? And, the most important question, is it okay to be afraid? But I didn’t ask her any of that. Instead, I searched in myself for the answer. What would it take to make the leap? An image jumped into my mind – a woman shouting, leaping, storming the barricades in the French Revolution, willing to risk her life for what she believed. Was that me?

“No, I don’t think so….” I said finally, feeling somehow defeated. “I don’t think I’m passionate enough.” She asked no questions. Made no comments. “Okay,” she said, and left.

But here is what I wrote in my journal immediately after this conversation:

“Oh Life—I had a chance to go on the peace march for integration on Washington but I don’t feel dedicated enough. It would be so exciting but Mom says if that’s the only reason I’d go I shouldn’t. It is not the only reason, but one of them. It would feel good to express my feelings about unequal rights – civil rights—but I can’t put this feeling into words.”
(August 20, 1963)

Ok. So what happened? Clearly, I had expressed a desire to go. But my mother did not encourage me in any way, or invite further conversation. Instead she faulted the reason I expressed – excitement. What was wrong with excitement? What if she had invited conversation by asking, “What is it that excites you?” or said, “Yes, it is exciting. This is one of the most important issues of our time. People of conviction stand up for what they believe and this is a chance to do that, to express how you feel.”

What was going on for my mother who was usually warm and curious about what I was thinking and feeling?  Did it seem too risky to let her daughter go into such an unknown experience? After all, at that point peaceful protesters had been beaten, sprayed with firehoses, taken to jail. Did she ask because she thought it was the right thing, but didn’t really know how she felt about it? Was it Dad’s idea rather than hers? If he had asked me, would it have been different? He and I talked more about politics and what was going on in the world. These questions cannot be answered. My parents are not alive to explore them with me.

As an adult, I did ask my mother what she remembered of the conversation. Her version was simple. She asked if I wanted to go and I said “I don’t feel passionate enough.” And, contrary to what we had experienced, that had become the truth for both of us.

Although I didn’t go — maybe even because I didn’t go — the power of the March on Washington ran deep in my mind. My journal entry for August 28, 1963, borrowing language from the media:

The Race Equality Demonstration is over and leaves a lasting impression on the world. ‘A coalition of consciences’ people who came not to fight for the Negro but ‘to stand with the Negro in his fight for equality of all races—all human beings.’ Some of the narrowminded senators in congress. One said, “the Negroes have more freedom here than anywhere. Why they have more cars and refrigerators, etc. etc.” Oh! The judgment of freedom!!! I wish the whole damn problem would be solved.

A year later, I would write about civil rights, “I wish I could do something. If they had another March, I would go.” I still have the Life Magazine coverage, saved at the time so I could read it over, look at the pictures, and imagine what it would have been like to be there. “They come marching up conscience road” says the headline. “Negroes stir up nation in mighty Washington march.” There were photos of the huge crowds, the speakers at the podium, the celebrities—Jackie Robinson, Mahalia Jackson, James Baldwin and Marlon Brando. But the image I came back to again and again was one of the marchers, black and white, men and women, sitting along the edge of the fountain, cooling their feet in the water.

The conversation with my mother is an example of how white liberal conditioning is transmitted through ambivalence and what is not said. We white people rarely know how to talk about race without self-consciousness, discomfort, or free-floating guilt. We often resort to platitudes or rhetoric for lack of connection to our own feelings.  But mostly we are silent. As a “good white person,” my mother made the offer. But because we had no way to explore the underlying feelings and fears—either hers or mine—the young girl who was excited by an opportunity to “do something” for civil rights, ended up feeling ashamed for not caring enough.

I was filled with longing as I pored over the pictures of the march, but I had no recourse other than to “wish the whole damn problem would be solved.” Magically. By someone else, somehow, someday.

I chose not to go to the March on Washington. But I realize now that not going changed my life, too. Like a depth charge, it took years for me to discover my own way to get beyond that buried sense of shame and “do something” about racism. Reminders of the March continued to affect me.  At a speech-writing seminar at my corporate job, I was suddenly moved to tears, my diligent note-taking interrupted by the voice of Martin Luther King filling the room, and a piercing sensation that I was only now hearing him for the first time.  One night on the way to visit a friend, I happened to turn on NPR. Moments later, I sat weeping in the front seat of the car listening to a replay of New York radio commentator Jean Shepherd describing the joy and excitement of people on the streets as they welcomed the buses rolling into Washington, DC for the March. I still have the Life Magazine article with pictures of the March. There is Martin Luther King smiling, his hand reaching out over the crowd. There are the people sitting on the edge of the reflecting pool, cooling their feet in the water. It is still my favorite.

Ironically, I didn’t have to go on a long trip somewhere else to find my way. I started with myself. The journey of coming to see my own conditioning as a white person and how that has shaped my life, has led to writing this today. I invite conversations about race and racism on this blog and in my life. I teach workshops for white people, so they can make the kind of difference they want to make in the world. I continue to find my own ways of making a difference, by arriving here in this moment, and being ready to take the next step.

More to think about:
Ten Things To Know about the March on Washington and Teaching the Movement Beyond Four Famous Words
TIME Special Issue: One Dream
Where we are today: From Rinku Sen in Colorlines Commentary “Building a New Racial Justice Movement”

“We cannot solve a problem that no one is willing to name, and the biggest obstacle facing Americans today is that, in the main, we don’t want to talk about race, much less about racism. Our societal silence makes room for inventive new forms of discrimination, while it blocks our efforts to change rules that disadvantage people of color. Unless we say what we mean, we cannot redefine how racism works or drive the debate toward equity.”

Has anything about the March on Washington affected your life personally? If so, how?
Did you learn about it in school? What were you taught?
How did your family respond to social justice issues when you were growing up? Do you remember any events in particular and how you were encouraged or not encouraged to take action?

This entry was posted in Uncategorized and tagged March on Washington, white liberal, white privilege. Bookmark the permalink.