The Family of Man

The Family of Man was my first holy book.  It was big and heavy, as one expects holy books to be, but with very few words. Instead it was filled with photographs from an exhibit at the Museum of Modern Art.  Nestled into the corner of the couch in the living room, I would lift it onto my lap and then carefully open it, always starting at the beginning.

The first picture to capture my attention was a girl resting face down on a lush forest floor, her nude body white against the dark pattern of leaves and ferns. How would it feel to lie naked on the earth like that? And was it okay for me to just look at her? Next came a couple entwined in each others arms under the words of someone named James Joyce, which began with “…and then I asked him with my eyes to ask again yes…” Intriguing, vaguely unsettling, and definitely too mysterious for an eight year old to understand! I moved on.

There followed page after page of photographs of people from all over the world – images of birth, death, love, anger, hunger, hopelessness, prayer, play, work, family, celebration… the common experiences of being human. As I took in each image, and the next, and the next, wonder, fear, curiosity, disgust, and delight moved through me in a rich compelling mix.  I was being invited to feel a part of something so big and so beyond my experience, it left me trembling. 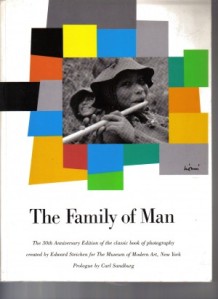 I can still see many of those images in my mind fifty years later. The Depression-era photo of a  skinny, craggy-faced woman, dark eyes staring into space as though there is nothing for her in this world.  In  one from Bechuanaland – now Botswanna – the village elder’s eyes are alight, hands raised like the claws of a great beast he may be invoking for the delighted circle of men, woman and children around him, the power of word and gesture holding the them all in imagination and place.  Each time I opened The Family of Man,  I knew I would be affected by a mystery I could feel in my body.

Several years ago, I picked up a copy of the book and, looking through it again, felt how strongly the images were still imprinted in me. But with my new-found awareness of such things, I also noticed that the number of photos representing the human family were not at all in proportion to the peoples of the races and countries of the world. Sixty-seven percent of the photos are of white people, 33% people of other races, and 1% racially mixed groups. Representing the continents, 48% are from North America, 26% from Europe, 16.5% from Asia (including the Middle East), 5% from Africa, 2% from South America, and o.5% from Australia. (Thanks to my niece and historical researcher Celerah Hewes-Rutledge for these calculations.)

I mention this not to diminish the power of the Family of Man, but to note that for many reasons, some having to do with colonization and white supremacy, including poverty and lack of access to technology, images of white people dominate this view of the human family. And I am guessing a large proportion of the photographers were also white, although Edward Steichen says in his introduction: “Over two million photographs from every corner of the earth have come to us – from individuals, collections and files. We screened them until we had ten thousand. Then came the almost unbearable task of reducing these to 503 photographs from 68 countries. The photographers who took them – 273 men and women – are amateurs and professionals, famed and unknown.”

Looking back, I can’t find a defining moment when I realized I was “white” and other people were another “race.” I grew up in Burlington, Vermont, a very white city in a very white state.  In my liberal, intellectual, middle-class household, there were no racial slurs or jokes.  We were brought up to believe that everyone was “created equal” even if some were poor and some were rich or lived in different countries or believed in different religions. The Family of Man definitely expressed my parents’ values, echoed by Edward Steichen – “a passionate spirit of devoted love and faith in man.”

What was invisible in the midst of this deeply humanistic sentiment was the predominantly white frame through which the pictures were taken, chosen, and viewed. As an eight-year-old white child looking at this book, I’m sure some part of me was noting people who “looked like me” and people who looked different, although that wasn’t my conscious experience. Indeed, the most important thing was the deep and heartfelt connection with people that the book fostered in me. But at the same time, on another level that also had consequences, I was learning to be white.

What about you?
What images do you have from childhood about the make-up of the human family?
What filter or lens was there on your view of “humanity” and your place in it?

For a current attempt to depict “the family of man,” check out 100 People: A World Portrait. Based on statistics “If the world were 100 people…” this global educational project engages children around the world in creating a new portrait of the 7 billion people on planet earth.

For an in-depth study of the original exhibit and its influence worldwide, check out Picturing an Exhibition: The Family of Man and 1950s America by Eric J. Sandeen.

This entry was posted in Uncategorized and tagged family of man, white antiracism, white privilege. Bookmark the permalink.

32 Responses to The Family of Man